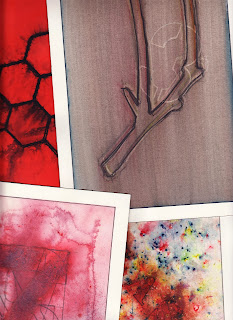 Painting produces a painting. The word painting refers to the action of painting as well as the result of that action. Historically the references are to the application of paint (a medium) to a surface (a support).  There are many types of paint.  There are many types of support.  There are many types of application.  Way to many of each to list here.
I started with watercolor on paper and then worked with oil on canvas. Eventually acrylic on paper became my chosen paint and surface. While working with acrylic on paper I began to use other objects in the painting. Metal and wood and paper were added. At first they were laid on the surface and eventually they began to pierce the surface. This led to the stacking of papers. After stacks of paper became thick enough the paintings no longer hung on the wall but were laid flat on a horizontal surface or pedestal. They came to be made less and less of paint but I still called then paintings. Today no matter what the medium or what the support I have a tendency to call it painting. A collage on wood made mostly of metal I may call a painting. A series of block prints will also be referred to as paintings. Dry pigment on paper I have also call painting. It is a term I use broadly. I respectfully reserve my right to.

Posted by Ballard Borich at 4:27 AM