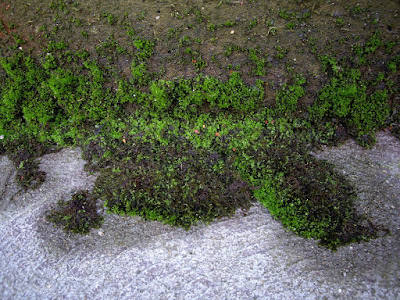 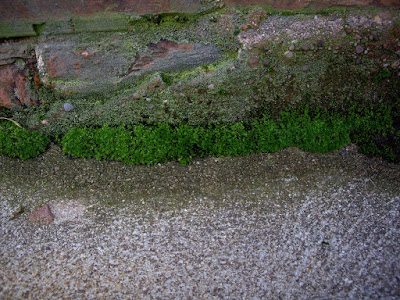 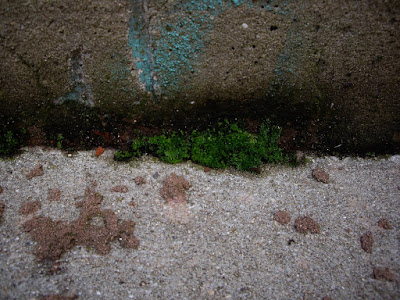 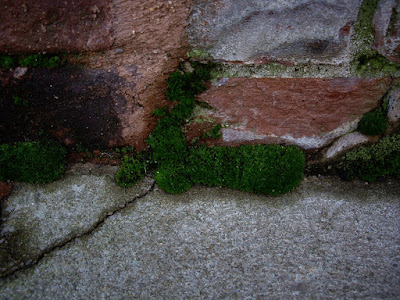 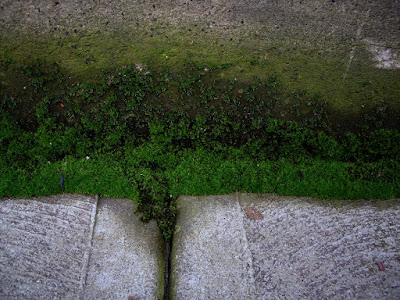 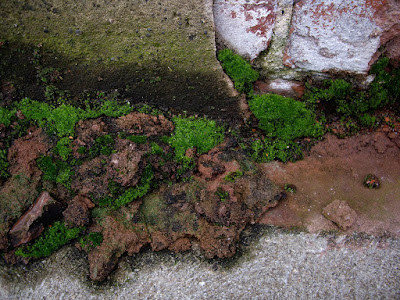 I have been experimenting and photographing as well as planning and talking about a series of photographs called "Moss Gardens of Cincinnati" for a long time. I even thought it should be a book. This has been a great year for moss and I spent time this September locating scenes to photograph. These are six of the scenes I have captured so far this October. The photos were taken close to Sycamore Street about three blocks north of Collector's Art Group. I have been looking for more than just moss. I wanted scenes that reminded me of gardens. Mostly I have been thinking of the gardens I saw in Japan. When I get enough to do a book I will be sure to let you know.
Thank you
Ballard

I had an interest in the visual arts from as early in life as I can remember. Memories of the thought of artwork as an act of value and substance seem to predate any other childhood memories. I thought I was doing meaningful works while I was still quite young. By the time I was eleven I was totally sure I was misunderstood as an artist in my sixth-grade classroom because of my genuine interest in abstraction.

I was raised in a rural area that left most of my serious learning about the visual arts to self teaching. I read all of the limited supply of books available about art and artists with no choice but to go through them again and again. The school I attended from the sixth grade to the ninth grade was very small. The number of students from the first grade to the twelfth grade combined was less than six hundred students. The library of course was small as well with absolutely no emphasis on art. There were some books on artists lives and all of those artists were from before the 20th Century. I do not remember any good art reproductions. I read the books then read them again. My personal vision of artists as apprentices and then having apprentices of their own was lovely and quaint but it left me with a strange gap between old masters and contemporary art. This gap was widened even more because the majority of the contemporary art examples I saw while living in that community were more like illustration. With my interest in art and my desire to learn I tried as hard as I could to learn about artists and art history I didn't have that much to work with at the time.

In the beginning of my high school years I moved to a more urban environment where I became aware of larger libraries a university and a small art museum. I went from the very small school to a larger school where there were now 700 students in the same grade I was in. The city's library was a vast improvement as far as looking at art was concerned. The most amazing change for me was the small art museum. (It is much larger now.) I could see some actual paintings not reproductions. The museum was also close to a university that had galleries as well. My ability to see art work changed drastically. There were also high school classes in art which were mostly commercial by nature but were better than anything I had available to me before.

I was profoundly influenced by the news of modern art movements in the popular media of the time. “Life” “Look” and “Time” magazines brought a superficial and somewhat entertaining news of the changing art movements in NYC to my family’s living room in Kentucky. These glances into the art world were a great foundation for more research and my continued self teaching. Each time I looked into the works of one artist it lead to looking into the work of other artists.

When I enrolled in college I signed up for elementary art appreciation and drawing courses. While following the meager course of study that was available to me I continued to use the library for my personal study of art.

When I left college I moved to Wilmington DE and took my first job in an art supply and picture framing store. I was exposed to more art and artists than I was ever aware of before. (Some of them were quite successful.) I found the paintings by famous illustrators of the Brandywine school to be fascinating. I had the chance to see many of them up close. I saw (framed) works by many members of the Wyeth family. The influences on me were from representational art. I thought I had possibly grown beyond that. However it was impossible to not be enthusiastic about seeing original works by people who were famous and admired. I learned that no matter what manner an art work was conceived and executed in a good painting will always be a good painting.

My next frame shop experience was in Louisville KY where wildlife art was very important. I had the chance to see many original works of art by the most famous wildlife artists of the time. Once again seeing original paintings close up influenced my feelings about painting. I realized I liked paint and other art materials. I liked seeing what other people did with them. I liked seeing quality works in all styles. This experience was abruptly interrupted by two years in the Army.

In the early 1970s I moved to Cincinnati OH. I attempted to run a gallery that is no longer in existence. While doing that I met several people connected with the “art scene” as it was at the time in Cincinnati. I worked at a great art supply store. I did framing in the finer frames shops of Cincinnati. I made friends with critics and appreciators of art. Those connections have made it possible for me to meet many of this area’s artists. I have been in many group shows and had several one person shows in Cincinnati. The work and showing experiences in Cincinnati lead me to this current co-ownership of Collector’s Art Group with my very good friend Terry Boyle.

Over the next few weeks I will add as much pertinent information to this outline as possible. This post much like myself is a work in progress.
Posted by Ballard Borich at 8:50 AM 2 comments:

My hope for "Selected Works" is to show artwork and photography and writing of my own and when it is alright with them to show some work by others as well.

Soon I will be introducing the limited 21st Anniversary edition of "Auspicious Circumstance" as well as the "Dedicated Absurdist" edition which will be quite limited. I also have some of the silkscreens I printed for the original deluxe edition to offer as well.

Today I am only hoping that I typed all of this correctly and have added my picture from our web site http://www.collectorsartgroup.com/

Thank you
Posted by Ballard Borich at 8:37 AM 1 comment: