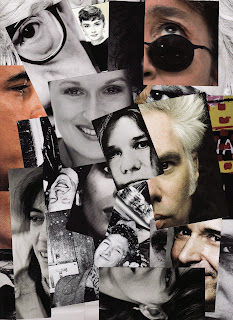 Some time ago I was working on a group of pieces that were based on the Seven Deadly Sins. In working with each sin I had a pretty good idea of what I was supposed to be dealing with. However I had a difficult time when contemplating Envy.
I have never wanted to be anyone else other than me. I have often wished to be a more effective version of me but I did not wish to be anyone else. I have never really wanted what truly belonged to someone else. That may be because I don't seem to want what everyone else seems to want. I don't know. And I have never actually felt like I deserve something for no effort. As you can tell contemplating Envy was not impossible but at least a bit difficult for me.
I finally began to understand when I thought about people following celebrities. People watching the lives of the rich and famous. It occurred to me that it wouldn't be any fun to watch some one have it all unless you wanted to have it all too. That was my beginning to understanding Envy. There is plenty of it to see and I found that I myself was not free of that thought.
There you have my weak excuse to play with collage specifically in a digital sense. I needed an excuse and I needed the practice.

Posted by Ballard Borich at 5:13 AM