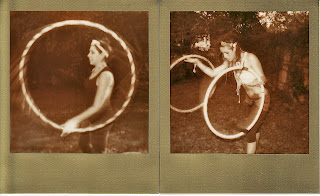 It's Audrey and Paiten again.  Two more photos were taken on Impossible Project's Gold Edition PX600 Silver Shade UV+ with a Polaroid One Step-Flash.  This film has an Important Information sticker on the outside of the box.  It says "Impossible images are sensitive to light.  Shield them the moment they eject from the camera and during the first 4 minutes of development."  These two photos were treated casually after exposure.  It seems to have worked out nicely.  Some times it doesn't work out so well but I will be showing those too.

Posted by Ballard Borich at 3:39 AM